I met Mark Kirchner on January 02, 2014, just as he was starting his life over again. He was a bit distraught and struggling with depression as he was recently divorced after 33 years of marriage. Mark was unemployed at the time of our meeting but had worked doing jewelry design out of his home for many years. He tried unsuccessfully to get help with a small jewelry business start-up from the Workforce Center in St. Cloud. It turned out he was unable to get their assistance because he couldn’t read or write the business plan they requested. This made employment  prospects very difficult. Mark was understandably frustrated. 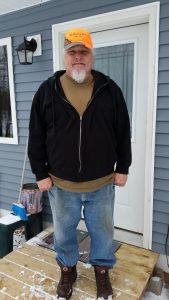 Mark has severe Dyslexia and he has a hard time performing daily tasks such as reading the mail, paying his bills, filing his personal papers or managing his bank statements. Things others take for granted, such as grocery shopping and reading food labels for example, is a real struggle for Mark. While he was married his wife handled these things for the family, but once the divorce was final he was struggling, and on his own. When I first met Mark, he was living in a cramped 20-foot travel trailer with no running water or septic system. He had constructed a small outhouse for himself and had to haul heavy jugs of water inside for cooking and washing dishes. His primary heat source was a propane heater in the camper, but it became insufficient during winter months. He needed an additional electric auxiliary heater to try and keep up with the cold Minnesota weather.

Around this time Mark communicated to me that his biggest frustration was being unable to read his daily mail. We met several times and talked about ways we could alleviate that stress. We started to investigate and search for apps that could possibly help his reading ability with his iPhone. We didn’t really know what exactly he would need, or what could help him with all the problems he was having. He was feeling isolated as he had a hard time with texting and keeping up with family and friends on social media. The grocery store was problematic because without being able to read food labels, he found it challenging to find specific items he needed. It seemed the apps available didn’t address all these issues. We looked, but didn’t find anything specifically useful at that time. It was stressful and it made his quality of life that much worse.

In June of 2014, Mark heard about a two-car garage for sale for $3,000. His camper was parked on property he already owned, and he thought the garage could be moved to his land to allow him to convert it into a living space for himself. I accompanied him to the bank to help him apply for a loan. Together we filled out the necessary paperwork. The loan was eventually approved and he moved the garage to his property in September of that year. 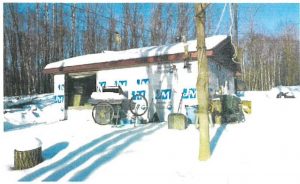 While it afforded him more space, it wasn’t without its drawbacks. He lived with dirt floors with plywood coverings, makeshift kitchen cabinets and he continued to live without running water and sewer. He used an old          –
cast iron wood stove in the middle of the room for heat.

He kept two cats for company, but other than that, he didn’t have much. It wasn’t perfect, but he was happy enough with it. It wasn’t a cramped 20-ft trailer with insufficient heat. Day-to-day tasks continued to be a struggle.

He continued to need my help with things like his voting ballot, making arrangements to help get his bills paid and checkbook balanced by his daughter in St. Cloud. He was moved to tears once when I told him my job was to help him achieve whatever goals he wanted to set for himself. No other agency had been willing to or able to help him without, in his words, “the red tape and bureaucracy”.

Mark and I continued to meet over the next year to explore options to improve his living conditions. He desperately needed a well and septic installed on his property. He was summarily denied a USDA loan for a well or septic because the garage he was living in didn’t have running water! He was frustrated and discouraged with the process as it was him hitting barrier after barrier.

At this time, we set new goals to help his living situation. We researched multiple housing possibilities, such as working with Habitat for Humanity or possibly investing in a modular or mobile home. It seemed everything we tried just didn’t work out for him, through no fault of Mark. He felt everything seemed stacked against him. He continually felt discriminated against when turning to agencies for help. For instance, agencies would send him letters in the mail but he was unable to read them, and when he didn’t respond by their deadlines, this resulted in his case being closed and having to be reopened. This led us back to trying to find an out-loud reading app that could meet his varying needs, although we never had much success finding one that could do the few specific things he needed. 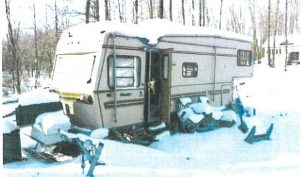 In December 2015, I accompanied Mark to Habitat for Humanity in Brainerd, MN. After meeting with the Director, the news was the rough estimate would be about $75,000 for building materials for him to get a Habitat house and $20,000 for a well and septic system. This left him devastated as he thought he would never get a loan for that much money. Habitat did give him a bit of good news; they could work with USDA directly on funding a home for him. This was exciting news, but we knew it was going to be challenging.

The first half of 2016 was full of more frustration for Mark. His disability made it hard for him to meet paperwork deadlines, return written correspondence, fill out applications, find and submit necessary documents and to comply with what both Habitat and USDA needed from him for the application.

I continued to meet with him once a month to try and get caught up on the application process, sort through his mail and get his bills paid. By this time, his daughter was no longer managing his finances and balancing his checkbook, as he didn’t want to continue to burden her with it. I could see the stress and frustration of his disability wearing him down throughout the process.

Finally, in August 2016, the USDA loan was closed and Habitat, along with a few volunteers, started building. This was helpful in more than just the obvious ways. After feeling cut off from family and friends for so long, it was so heartwarming for him to see his friends and family helping with construction of the home. It reminded him how loving his family is!

We continued to talk about solutions for help with reading. I was able to loan him an iPad preloaded with apps designed to read out loud to him. This was helpful, but it had limitations as to what it could do for him. Because of this struggle, it has sparked his interest to try to help others with similar disabilities. He is passionate about creating a “one-stop-shop” app that would give users the ability to turn speech to text, text to speech, read food labels at the grocery store, help with distinguishing needed mail from junk mail and reading QR codes on packages, brochures or mailings. Additionally, it could help reading web pages, posting on social media sites or filling out forms online. He has even been considering starting a “go-fund-me” page to help get his idea started. He hopes to someday talk to Legislators about his idea.

While the house was being built, and thinking of the future, he talked to the Director at Habitat and asked if making the home accessible would be possible. The answer was yes, and he was pleased to find out he could have wider doorways and hallways, a raised toilet and roll-in shower. 4 months later, in December 2016, he was given the keys and he now has a beautiful, accessible 2- bedroom home.

Together, Mark and I worked to complete and submit an application for Access North’s Framing Hope program, where we are waiting to get a household water filtration system, a storm door, hoses for outside and other miscellaneous household items. He has come such a long way since that 20-ft trailer where I met him.

Several good things have been happening for Mark since his home was completed. He was approved for fuel assistance at Bi-CAP and he now doesn’t have to worry about heat. Additionally, staff at Access North devised a file system using pictographs to make filing his important papers easier for him. He has really appreciated this and has found it to be quite useful. The small steps to independence have been adding up.

Mark said to me once,

“I came up to here to the woods to hide. I wanted to fade away. I went to sleep hoping I would never wake up. If it hadn’t been for Access North, I would have never achieved what I have today. Thank you, Access North.”

I think that says it all.