Leech Lake is the third largest lake in Minnesota – it covers 111,527 acres, has 230 miles of shoreline and reaches a maximum depth of 150 feet, although over 80% of the lake is less than 35 feet deep.  On the shores of Leech Lake are the towns of Walker, Federal Dam, Onigum, and Whipholt.  Several rivers feed into the lake, such as the Shingobee, Kabekona, Steamboat, Sucker and Boy, while the only major outlet is the Leech River. The lake is surrounded by the Chippewa National Forest and features many large and diverse bays. Most of Leech Lake also lies within the boundaries of the Leech Lake Indian Reservation.

Walleyes:  They continue to be the most sought after fish on Leech Lake and after several years of extensive stocking and management practices, the fishery is presently at peak levels with strong populations of fish from 13 inches to over 25 inches. The lake has a 4-fish limit with a protected slot of 20″ to 26″, which assures protection for the large fish as well as providing for limits of eating-size fish.

Northern Pike: This exciting fish will put up a big fight and is always fun to catch.  They are located throughout the lake and are typically willing to bite.  They are the “bread-n-butter” fast-action fish for many anglers.

Muskie:  Leech Lake was crowned the “Muskie Capital of the World” after the famous muskie rampage during a hot spell in July 1955.  Due to a strong catch and release ethic, the lake now actually produces more big fish over 50 inches than it ever has.  Break out the big baits and don’t forget your camera!  We can hardly wait to hear your muskie story!

Bass:  Leech Lake has quality largemouth bass fishing unmatched in the Midwest – and they are overlooked by most anglers.  Look for them in shallow water with heavy cover – you won’t be disappointed.

Perch:  Fun to catch all season – and many people say they are the best eating fish in the lake.  Look for the large perch to be particularly aggressive in the fall.

Bluegill/Sunfish:  Panfish are readily available in Leech Lake and willing to bite all season long.  The whole family will have fun catching them!

Crappie:  A popular fish to catch, but more elusive than the bluegill and sunfish.  Find these on warm spring days and again in the fall, with a few in midsummer also. When you do get into them, they can be big!

Eelpout:  This fish is a freshwater cod that stays deep during open water season, but is relatively easy to catch through the ice.  We even dedicate a weekend in February celebrating this species of fish.  You don’t want to miss this adventurous weekend!

Prey Species:  The primary prey for gamefish in Leech are perch, crayfish and minnows, including spottail shiners. Larger gamefish will also key on ciscos (tullibee or lake herring). Insects and invertebrates are also important components of the food chain. 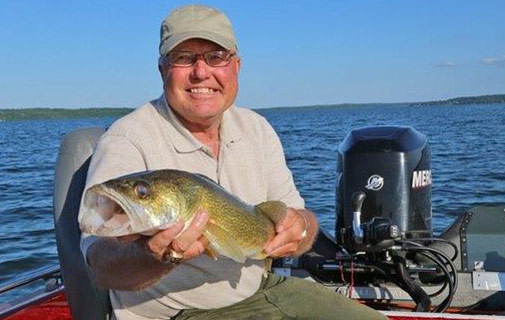